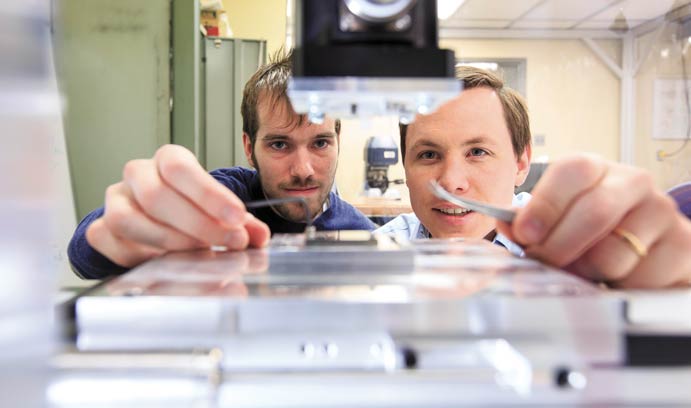 Triceratops, the three-horned dinosaur that lived nearly 70 million years ago, possessed teeth that were far more intricate than those of any reptile or mammal living today, scientists have learned.

Researchers from Lehigh, the University of Florida, the University of Pennsylvania and the American Museum of Natural History have determined that Triceratops’ teeth could slice finely through dense material, giving the dinosaur a richer and more varied diet than that of modern reptiles.

The group reported its findings in June in Science Advances. The project was funded by the National Science Foundation. The teeth of today’s reptiles are built mostly to seize food and crush it. They do not occlude—or come together—like those of mammals and cannot chew.

The teeth of most herbivorous mammals wear with use to create complex file surfaces for mincing plants.

Gregory Erickson, professor of anatomy and vertebrate paleobiology at Florida, acquired teeth from museum specimens of Triceratops in North America, cut them open and discovered that they were made of five layers of tissue. Horse and bison teeth, once considered the most complex to evolve, have four layers, while the teeth of crocodiles and other reptiles have just two.

Erickson then passed the specimens on to Brandon Krick, assistant professor of mechanical engineering and mechanics at Lehigh and an expert in friction. Krick and his group, including graduate student Mark Sidebottom, mimicked the motion of plants across the dinosaur’s teeth by scratching the teeth and measuring tissue wear rates.

The group developed a sophisticated 3-D model to show how each tissue wore in a strategic manner, leaving a complex surface with a recessed area in the middle of each tooth that served to reduce friction during biting and to promote efficient feeding.

“The model can be used to design material systems with optimized wear properties and surface features for many applications,” he said.—Timothy Hyland