A Man of the Times

Michael Golden describes himself as a "child of the 1960s." And he's got the story to prove it.

Golden, who has served as vice chairman for the New York Times Company since 1997, has spent the past three decades working in the world of journalism, helping the Times maintain its status as perhaps the most important and respected news organization in the world.

But while Golden ’71 ‘74G was born into the newspaper business—his cousin, Arthur O. Sulzberger Jr., is currently chairman and publisher of the Times—he wasn’t always certain that journalism was his calling. In fact, for a while, he was fairly certain he wanted to be a teacher. And that’s precisely what he came to Lehigh to learn to be.

Golden earned his B.A. from Lehigh in 1971, then enrolled in the College of Education to earn his master’s degree in higher education. It was then, during his time with COE, that he stumbled across a unique program that, to his mind, perfectly meshed with his 1960s idealism. That program saw Golden and his fellow COE students spend one academic year teaching inmates at prisons around Pennsylvania.

That often difficult, often unnerving year, says Golden, only validated his belief in the enduring power of education.

Golden recently took a look back on his unique Lehigh experience, and shared his thoughts on how his time in Philadelphia’s Graterford prison shaped the way he views the worlds of education, public policy and journalism.

TELL ME ABOUT YOUR CURRENT ROLE WITH
THE NEW YORK TIMES.

“I am the vice chairman of the New York Times Company. I’m also the head of the human resources department, and I have our international division reporting to me—the international New York Times and all web activity outside of the U.S. I have been at the company for 30 years this year, and I’ve had a varied career here. I’ve been in the magazine business, in our regional newspaper business, in the corporate center of the company. I was publisher of the International Herald Tribune from 2003 to 2008 and I’ve also done work on the human resources side of things. I’ve had a really great opportunity to work in a wide variety of positions over the years.”

“When I was in high school, my ambition was to be a math and science teacher. And that ambition led to my ending up at Lehigh. While I was in school there, my interests changed and were less about math and science and more about sociology and social psychology—those sorts of behavioral sciences. But the desire to teach never went away. In fact, I actually worked for a couple of years as a potter. I took a course at Moravian in pottery, worked as an apprentice, and helped out with some classes. Of course, I eventually concluded that that wasn’t going to work, and so I started looking around for jobs in teaching in the Lehigh Valley. I didn’t have much luck, but then I learned about this opportunity at the College of Education, in a program that was then called Social Restoration. It was partly funded by the state to help train people in how to teach and work in the prison system. That was a perfect fit at the time.”

WHY WAS IT SUCH A PERFECT FIT?

“I’m a child of the 1960s, and trying to do ‘good’ was high on my list of priorities. I wanted to help people who were disadvantaged, and I thought that program would bring together my passions for teaching and social activism, and so I jumped at it very quickly.
"As it turned out, the timing was just right.  They were in the final stages of selecting a class, and I found myself accepted into the program. I worked with a class of about 15 students, and we dispersed ourselves during that school year into three different facilities. I was assigned to the maximum security prison called Graterford [in the Philadelphia area], and I taught there for nine months. The experience had a dramatic impact on me in many ways.”

“It was a real education. In part, that was because I was learning more about teaching, but I was also seeing a side of society that I had not been much exposed to. It was amazing to see a different side of things, especially with respect to how a lack of educational opportunities could have a negative impact on a certain population. But I also saw how education could improve somebody’s situation.”

DO YOU RECALL WHAT IT WAS LIKE WORKING INSIDE GRATERFORD? WAS IT CHALLENGING? UNNERVING?

“Oh, I remember what it was like. That memory has not faded. I don’t think I had a clear expectation for what I was going to experience when I first went in. I think maybe I was a bit naïve, in that I felt we would have a greater impact than we eventually did. Now, I do think I made a meaningful impact, but it was really on a smaller number of students.”

“That first week we were there, we had people coming in by the dozens for our program. There were 15 or 20 in every class, and we were very excited. But after the first week, those numbers dwindled down to maybe five people. I was sitting there thinking, 'Wow, I must be doing a terrible job—I’m driving away all of the students!' Well, of course, what’s closer to the truth is that a lot of the residents felt that going to school would look good if and when they went before the parole board, and that it was what the board would have wanted them to do. But then they got to class and realized it was going to be work. In that sense it was almost like a New Year’s resolution for some of them. But the ones who did stay, I have to say, they were very committed to it.”

DID YOUR TIME THERE CHANGE THE WAY YOU LOOKED AT THE WORLD?

“Just the experience of being there was very powerful. Within the first couple of weeks that we were there, a prison guard was killed in an interaction with an inmate. While we never heard the truth behind the story, it seemed like maybe this guy was bringing in stuff for the inmates, and then the relationship went badly wrong. They locked down the prison. The guards went on strike. Prisons were becoming less autocratic and more open in reporting about what was going on in them. The guards didn’t necessarily like that change. They liked the old system where guards were the absolute masters. But all of a sudden, the residents were allowed to move freely around the prison. They could choose not to do certain jobs. The guards felt that all of this change was what was causing all of the ills in the prison, and so they went on strike. But my colleagues and I felt we were there to do some good. We stayed and we helped as much as we could. There were a lot of angry, upset people in that prison, and there were a lot of threats made. But none of it ended up being serious.”

WHAT WAS YOUR
NEXT STEP?

“Well, then I went back into fantasy land for a while. My wife and I moved to France in 1974, and we both found work as teachers in France. It was idyllic. We traveled Europe. We learned to speak French. It was a spectacular experience. But after two years, I then realized that teaching was not going to be my life’s work. I eventually had to decide then whether to go into journalism—which is the family business, of course—or go to law school. I chose correctly, I think, and went into journalism.”

SO YOU’VE MADE YOUR LIFE IN JOURNALISM. BUT DO YOU BELIEVE YOUR EXPERIENCE AT LEHIGH, AND ESPECIALLY YOUR TIME IN THAT PRISON, HAS INFORMED THE WAY YOU VIEW THE WORLD AND YOUR WORK?

“Yes. It was absolutely pivotal in helping me realize that there are parts of our society that are shielded, guarded, kept secret—places where you really don’t know what’s going on. I also learned that we as a society don’t spend enough resources on certain things, even though we clearly should. And I believe education is one of them. Sometimes I believe that America does not value its children enough. We don’t pay for pre-K programs. We don’t pay for good food in schools so those children have proper nutrition. We don’t pay for their health care. We underfund schools, and we underpay teachers, and we are reaping the results of that. Look at our lack of competitiveness around the world. That’s not a fluke. That’s a result of decisions that we have made. But I see what the College of Education is doing—the real world efforts they are making to bring new ideas to the marketplace, the real practices they are introducing that can change the way kids are educated. That’s critically important.”

WHAT WOULD YOU TELL YOUNG PEOPLE WHO WERE CONSIDERING A CAREER IN EDUCATION? WHAT COULD YOU TELL THEM TO CONVINCE THEM THAT IT MIGHT BE THE RIGHT PATH FOR THEM?

“I always liked that fabled story about how Steve Jobs went out and recruited John Scully to Apple from Pepsi. He was having trouble selling John on the idea, and then finally he said, ‘John, do you want to spend the rest of your life selling sugared water? Or do you want to change the world?’ So along those same lines, I would ask students, ‘What is your goal? What do you want to do with your life?’ If you want to have an impact on people, and if you want to help people live a better life, then the field of education is a great place to do that. If your goal is to make a lot of money, then maybe an MBA or a law degree is a better choice. And that’s fine.  But if your ambition is to have a lifestyle that allows you to make a real and positive difference in this world, then education is a prime place to do that.

"And that’s one of the fun things about working at the New York Times. The journalism that we do has a real impact. It has changed the debate on so many topics, and education provides the opportunity to have the same kind of impact.” 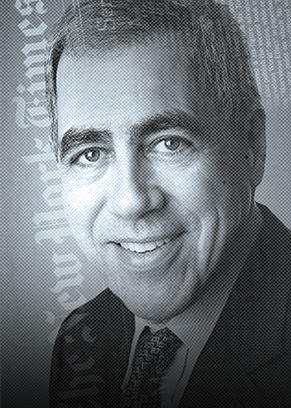 Michael Golden made his career in journalism at The New York Times, but his worldview was shaped, in part, by his time at Lehigh's College of Education.