A grand stage for a great rivalry 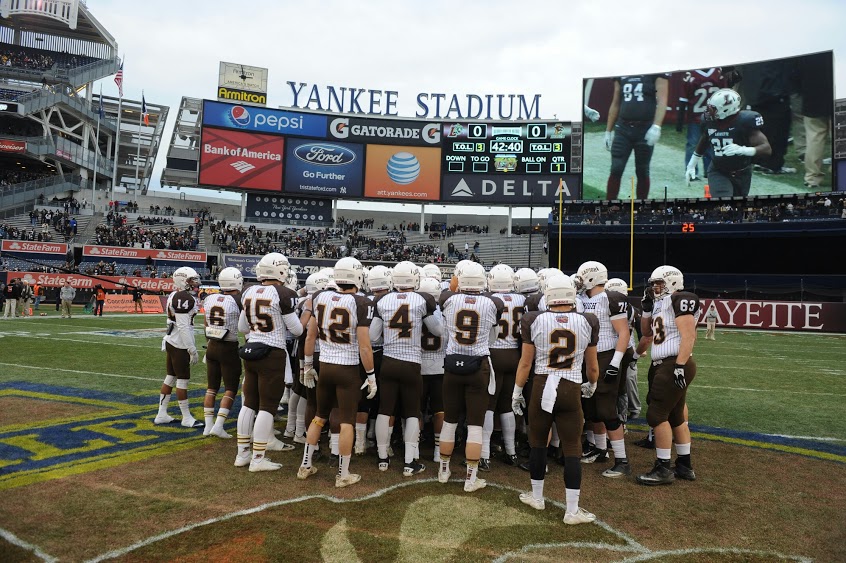 Lehigh was unable to overcome a slow start in the 150th playing of The Rivalry, and fell to Lafayette, 27-7. 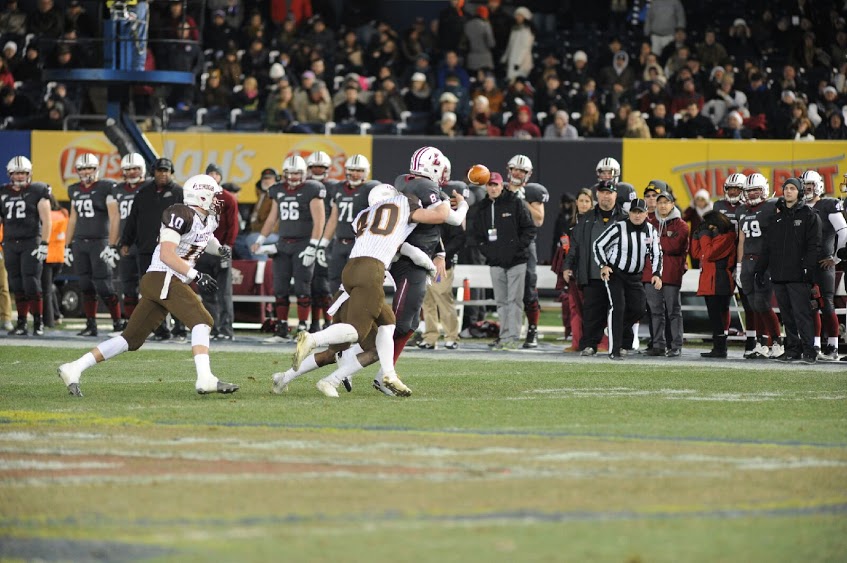 Lehigh fought hard in the second half but couldn't overcome an early 21-0 deficit. 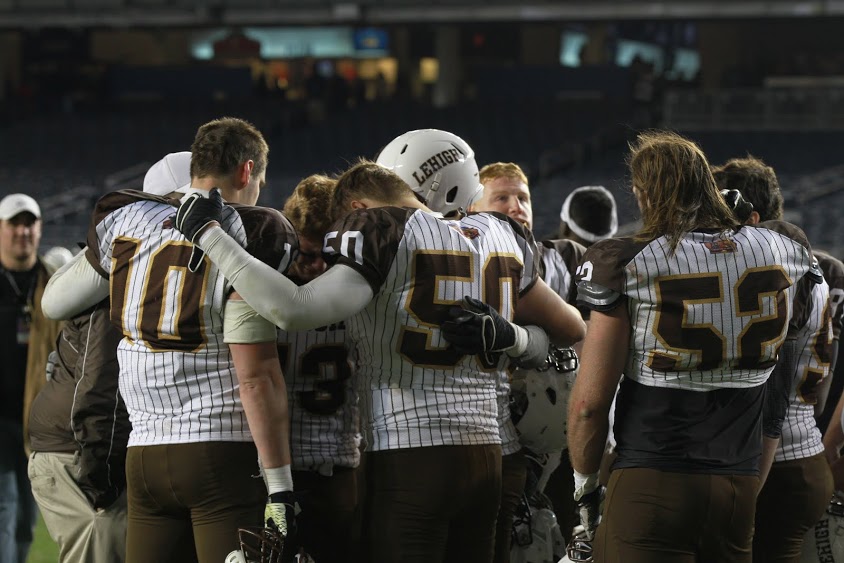 Despite the loss, the experience of playing at Yankee Stadium would be one for the Lehigh players to remember, said coach Andy Coen. 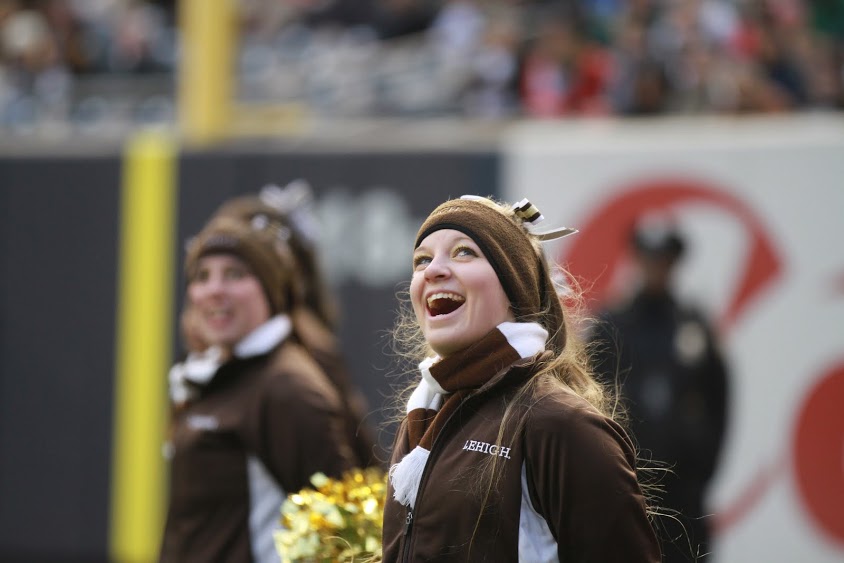 The 150th edition of The Rivarly was a once-in-a-lifetime experience for the entire Lehigh community. 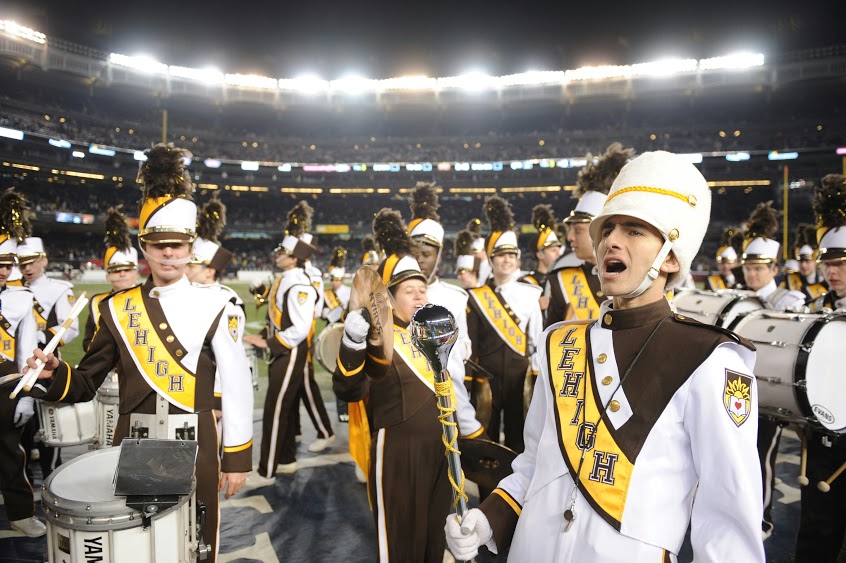 The Marching 97 took to the field to entertain the more than 48,000 in attendance at Yankee Stadium. 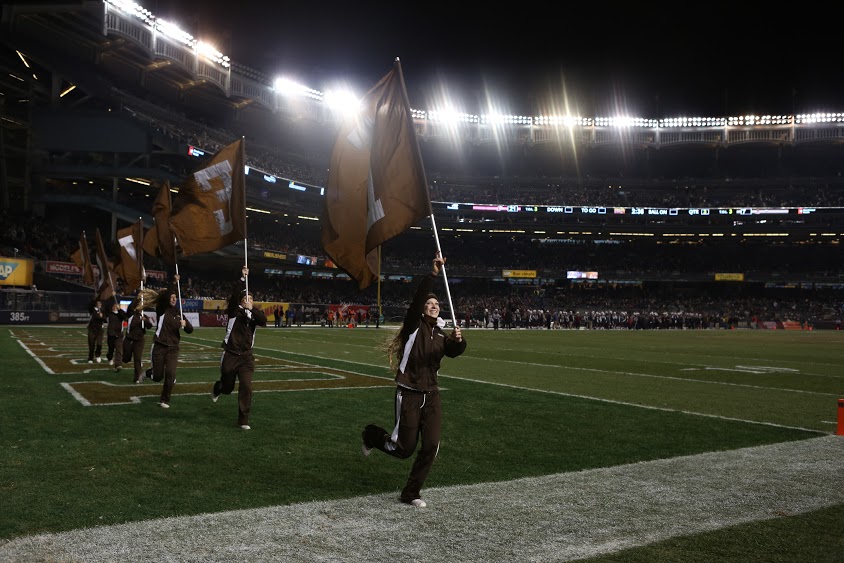 The Lehigh family enjoyed a festive atmosphere at Yankee Stadium. 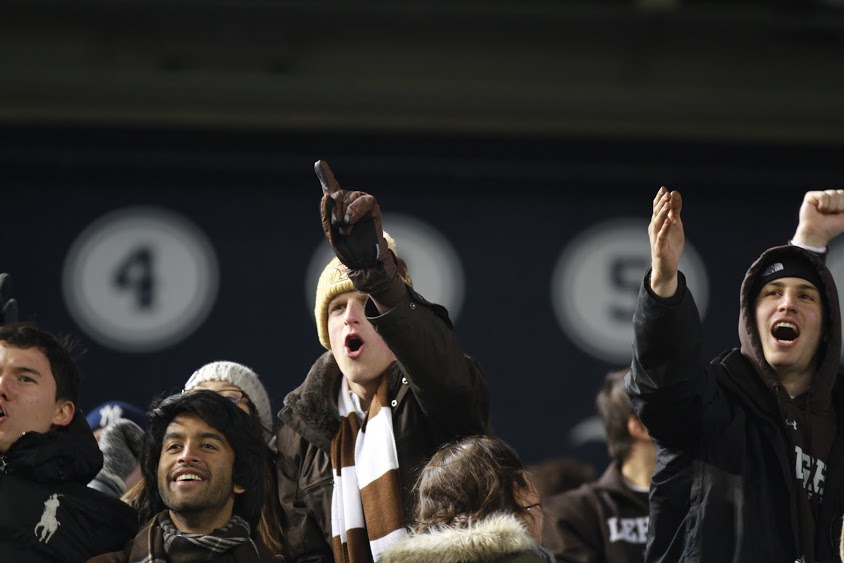 Lehigh fans, loyal to the end.

On Saturday afternoon at New York’s Yankee Stadium, college football history was made.

And though the thousands of Lehigh fans who helped sell out the iconic venue would leave disappointed by the result of the game—the 150th playing of the football rivalry between Lehigh and Lafayette, which the Leopards won, 27-7—there could be no denying that the game itself, and the weekend of events that surrounded it, comprised a fittingly grand celebration for one of college football’s greatest traditions.

Through 130 years and 150 games, the game known simply as The Rivalry has delivered to fans of both schools—and college football fans nationwide—the kind of thrills and excitement, upsets and standout performances, that only the greatest of rivalries can provide. This great game, the single most played rivalry in all of college football, has become an institution unto itself—one of the very traditions on which college football was built. And every one of its 150 editions has mattered.

But even still, it’s safe to say that the 150th playing of The Rivalry will be remembered as an entirely unique chapter in the story of this great series.

A staggering 48,256 fans--the second-largest crowd to ever see a college football game at the venue--filled Yankee Stadium to witness college football history in the making, and the two teams delivered a typically spirited, hard-fought, hard-hitting and dramatic contest. In the end, the Mountain Hawks were unable to fight back from a slow start—the Leopards jumped out to a 21-0 lead in the first half—and suffered their second Rivalry loss in a row.

But of course, while the game was the centerpiece of the day, this particular Saturday transcended what occurred on the field of play alone. As the capstone event of a weekend that brought thousands of Lehigh and Lafayette alumni and friends to New York City, the game served as a dramatic high point for a celebration that was literally years in the making.

Both universities and their fan bases turned New York City into their home away from home for the weekend, and between all of the events, the celebrations and the game itself, the Mountain Hawks and Leopards made the city and the nation more aware than ever of the history, tradition and enduring importance of The Rivalry.

The game and the weekend, said Lehigh’s Murray H. Goodman Dean of Athletics Joe Sterrett, was a “special opportunity” for the Mountain Hawks and Leopards—one that saw them step out of their “comfort zone” and deliver a one-of-a-kind experience for their loyal fans.

“I really hope that New York City and the entire nation comes to appreciate our institution more because of this event,” he said.

Alumni, students, faculty and friends of Lehigh spent Saturday morning attending parties and tailgates located throughout the city, then began arriving at Yankee Stadium as soon as the gates opened at 1 p.m. In the build-up to kickoff, fans could be seen roaming the iconic stadium, snapping pictures, reuniting with friends and enjoying all the amenities the venue had to offer.

As the minutes counted down to kickoff, fans were entertained by Lehigh’s Marching 97, while the National Anthem was sung by the choirs of both Lehigh and Lafayette. By the time the teams took the field, the atmosphere in the stadium was truly electric, setting the stage for the incredible action that was to come--a tough, gritty affair that saw Lehigh fall behind early, then battle back in the second half, only to see their effort fall short.

The game may not have turned out the way the Lehigh community had hoped. But the experience--the entire weekend--was one to remember.

"It was a fabulous atmosphere," Coen said. "What a wonderful experience--for the players, the coaches and the fans. My hat goes off to Joe Sterrett and Bruce McCutcheon, and both of the institutions, for putting this game together. .... These players are still going to be able to tell their grandkids, 'I remember playing Lafayette at Yankee Stadium.' I'm 50 years old, and it was a thrill for me. I just wish we had played better."

Added senior wide receiver Josh Parris: "These past two days have been amazing. But it would have just been better with a win."

For in-depth coverage of the game, visit Lehigh Athletics.

And to read more about the entire weekend of events for the Lehigh community, see the links below.

From football to theater to finance, Lehigh enjoys Rivalry 150 Weekend 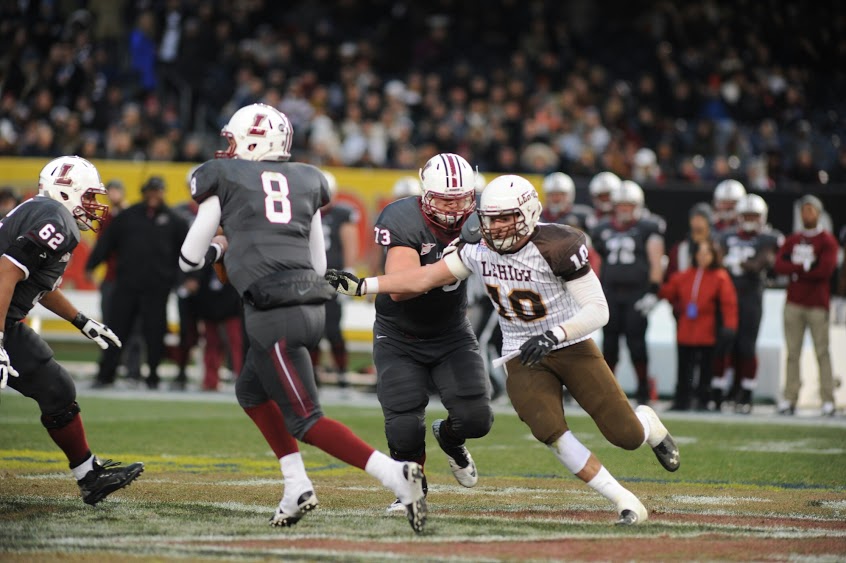 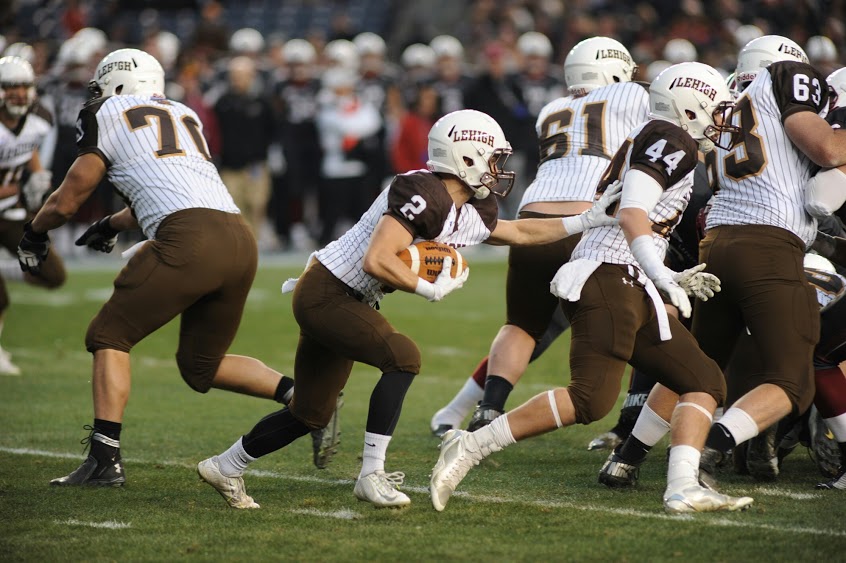 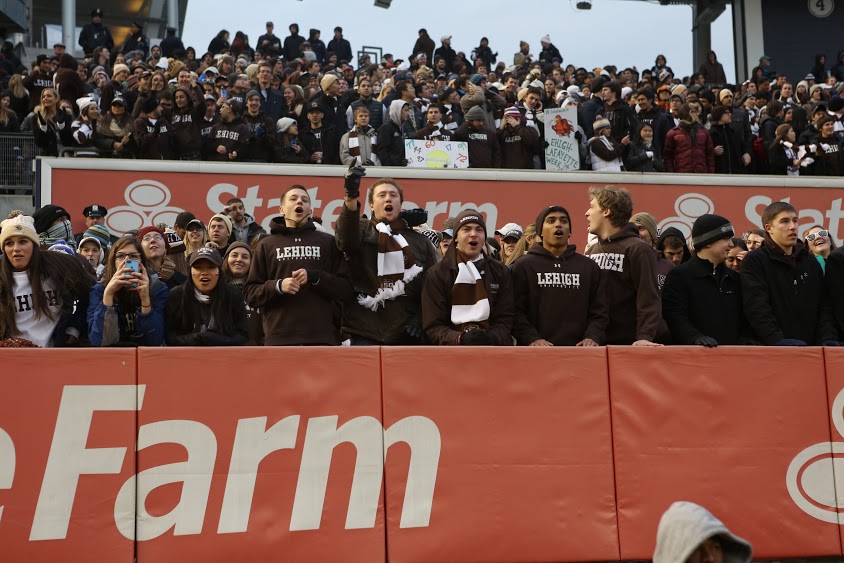 Lehigh students packed their section in Yankee Stadium and offered strong support for the Mountain Hawks. 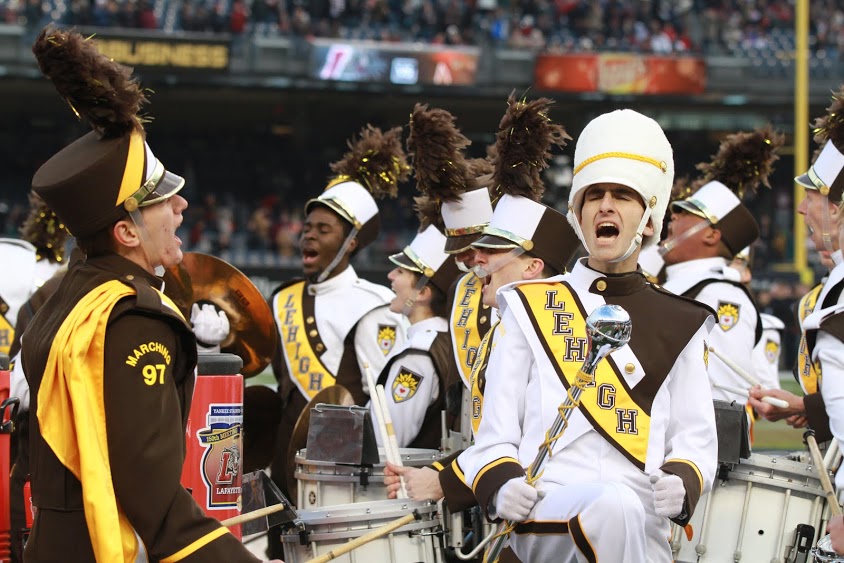 The Marching 97 entertained the sell-out crowd at Yankee Stadium. 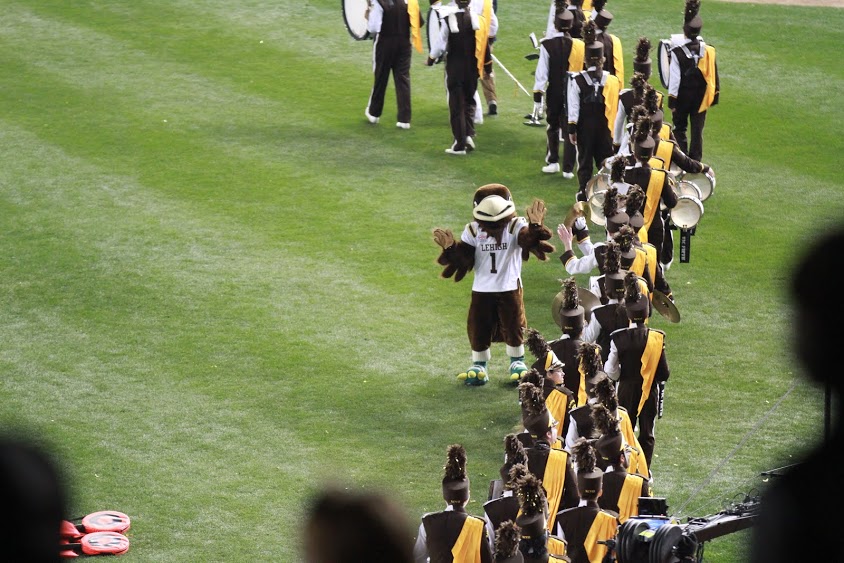 Clutch enjoyed some time in the spotlight, as well.